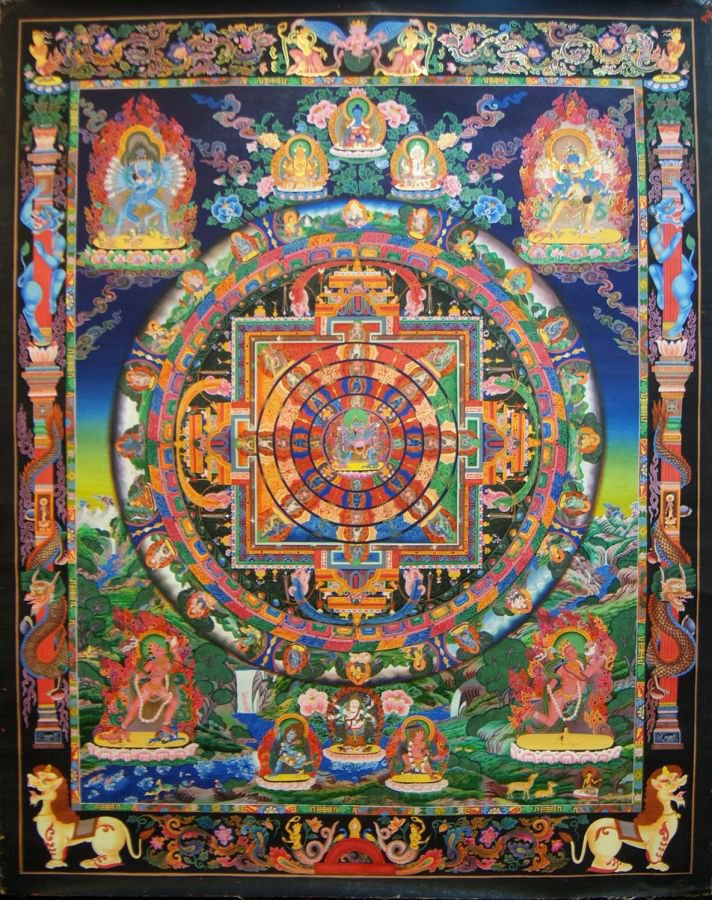 Chakrasamvara mandala is hand painted in cotton canvas with natural colors. The size of this mandala is 106 x 81 cm and weight is 0.2 kg.

Chakrasamvara mandala is handpainted by Mandala artists in Kathmandu Nepal. It is handpainted in cotton canvas with natural colors. Chakrasamvara is a leading tantric deity who embodies great bliss realizable through a combination of wisdom and method.

Chakrasamvara is presented at the center of the mandala.

Chakrasamvara is represented with a blue body, four faces, and twelve arms in yib-yum union with his wisdom energy Vajravarahi. She holds a skullcap in her left hand behind his back and a vajra headed chopper in her right. The chakra referred to is the chakra of Supreme Bliss.

Chakrasamvara is regarded as the most important meditational deity [Yidam] of Vajrayana Buddhism, & the primary Yidam of the Kagyu tradition with its origin in the meditation of the eighty-four Mahasiddhis of India. He stands on a sun disc surrounded by a flaming aura of his own radiant wisdom. He wears a tiger skin loin cloth in the manner of an ascetic yogi and is adorned with both bone and jeweled ornaments and a garland of fifty freshly severed human heads.

His forehead sports the third eye of wisdom and the expression on his face is a mixture of wrath and passion.