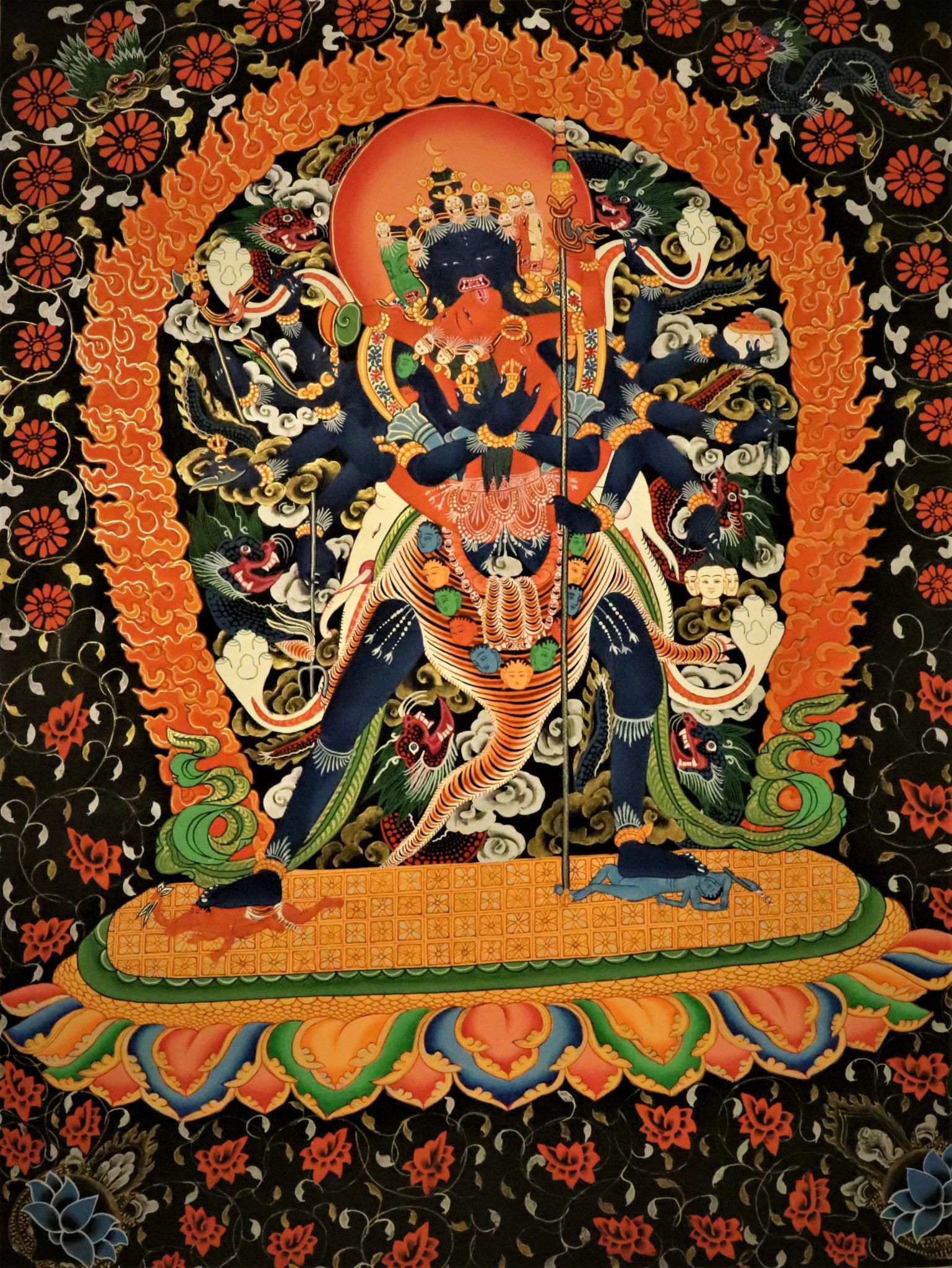 Chakrasamvara Thangka Painting is handpainted beautifully in Kathmandu Nepal. Chakrasamvara is known as the Wheel of Bliss in English.

Chakrasamvara Thangka Painting is handpainted beautifully in Kathmandu Nepal. Chakrasamvara is known as the Wheel of Bliss in English. The principal tantra of the Anuttarayoga Wisdom (mother) classification of the Vajrayana Buddhist Tradition.

Chakrasamvara is one of the most popular deities in Tantric Buddhism in the Himalayan regions and Tibet after the 11th century. He can appear in several dozen different forms, from simple to complex and peaceful to wrathful, which makes it necessary to rely on the descriptive literature in the Sanskrit and Tibetan languages to identify his various forms.

Adding to the complexity, there are more than fifty different traditions of these forms in Tibetan Buddhism. The different forms are meant to emphasize different types of meditation practice that are suited for specific types of emotional and psychological characteristics in the tantric practitioners who take on these complex practices.

Shri Chakrasamvara with a body blue in color, four faces, and twelve hands. The main face is blue, left face red, back face yellow and right face white. Each face has three eyes and four bared fangs. The first two hands hold a vajra and bell embracing the mother. The lower two hold an elephant skin out-stretched; third right a damaru, fourth an ax, fifth a trident, sixth a curved knife. The third left holds a katvanga marked with a vajra; fourth a vajra lasso, fifth a blood-filled skullcup, sixth carries the four-faced head of Brahma. The right leg is straight and presses on the breast of red Kalaratri; left bent and pressing on the head of black Yama. The hair is tied in a topknot on the crown of the head; on the crest a wish-fulfilling jewel ornament and crescent moon. The soft spot at the top of the head is marked with a vishvavajra. Each head has a crown of five dry human skulls; a necklace of fifty fresh heads and six bone ornaments; wearing a lower garment of tiger skin; possessed of the nine emotions of dancing; grace, fearlessness, and ugliness; laughter, ferocity, and frightfulness; compassion, fury, and peacefulness.

In the lap is the Mother Vajravarahi, with a body red in color, one face, two hands, and three eyes. The left holds a blood-filled skullcup embracing the Father and the right a curved knife in a threatening gesture pointed in all directions. The hair is worn piled on the head; a crown of five dry human skulls and fifty dries as a necklace. The left leg is straight and right bent, embracing the Father. Both Father-Mother stands in the middle of a blazing fire of pristine awareness.

The Gantapada Lineage of Three Cycles, together with its Branches: Vajradhara, Vajravarahi, Vajra Ghantapada, (etc., continuing from Ghantapa in the previous lineage).